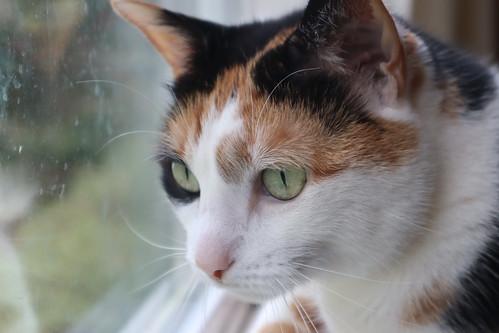 Cats have always been tenuously domesticated, at best. The relationship between human and feline is one of decided economic exchange, with little of the emotional bond that one sees throughout history between human and canine. That is not to say that our feline companions do not have a fondness for us, but the nature of cats is more solitary in many ways. And folklore echoes this human unsureness about the relationships they have with their cats.

In Scotland, the legendary Cat Sith may have been based on feral and wild cats who roam the area, or even the hybrid Kellas cat, which shares some striking similarities to the descriptions of the Cat Sith. But the Cat Sith was essentially a fae cat creature, capable of cursing households and stealing the souls of the dead. Folkloric descriptions of the Cat Sith is a cat as big as a dog that is all black, except for the white patch on its breast. Looking at images of the Kellas cats of Moray, it’s easy to see where the comparisons are drawn.

But the Cat Sith came to be associated with the folktale character of The King of Cats, as described in a story that was first recorded in the 16th century in William Baldwin’s Beware the Cat. In the story, a man was hailed by a cat in the forest and told to tell his own cat that “Grimalkin is dead.” When he gets home, he tells his wife the story, and their cat jumps up and says that “if Grimalkin is dead then farewell” and left, never to be seen again. Interestingly, in this first written version, the man’s cat is female, as evidenced by the pronoun used by the mysterious cat in the woods.

Later on, this story is expanded upon. The man comes across not a single cat who hails him, but a group of cats carrying a coffin, who tell him that the king of cats is dead, and upon hearing this, the man’s cat jumps up and declares that they are the new king of cats and leaves. Of course the implication was that not only was the man unaware his cat was feline royalty, but also they could talk.

And I think this says a lot about the relationship between man and cat. While wild canines do exist, and were a threat to humans for millennia, cats are somewhat different outside of areas with large cats like lions, jaguars, and tigers. On the isle of Britannia, cats were generally either domesticated, or one of the increasingly small population of wild cats. But even domesticated cats are not entirely domestic, up to the present day. Plenty of people “own” cats who come and go as they please. While our own cat is exclusively an indoor cat, she does enjoy watching the exploits of the neighbor cats who roam the yard.

As a final note, mythology of the Cat Sith includes the ritual of leaving a saucer of milk out for the creature on Samhain eve so that they will bless your house (and to avoid the curse if the cat doesn’t get their milk). There was also a legend that the Cat Sith was a witch who could transform into a cat nine times, and on the ninth time would stay a cat forever, and may be the origin of the idea that cats have nine lives.

So as you enjoy the company of your feline friends, remember to be respectful. You never know when you might be in the presence of the next King of Cats.