It is a new month and a new plant to explore in Judith Berger’s Herbal Rituals. The focus plant in December is pine, which is already quite prevalent in mundane celebration this month. I was thrilled to find some beautiful white pines in our local park, well away from the roadways, and private enough for me to gather some needles ethically without having to explain myself to passers-by.

December is the end of the Gregorian calendar and in a lot of traditions, the winter months were not considered actual months at all. They were somewhat of a time outside of time, when people would largely hunker down, eat food from their stocks from the harvests, and spend time in community. Particularly in northern latitudes, it would be a dark and cold time, and it could get dreary, I imagine.

Pine, in Berger’s book, is not only traditionally associated with December holidays, but also has uses in warming, nurturing, and grounding the body and spirit during this cold and dark time. But they are also associated with light and illumination. In Scottish tradition, “pine candles” or chunks of resin-rich pine fatwood are burned in their saining ceremony, particularly in rituals for newborn babies. So pine, as an excellent natural fire starter, can also represent the return of light, which begins at the end of December with the winter solstice.

Pine makes an excellent infusion or decoction, rich in nutrients that are particularly good against ailments common in winter. Or it can be infused into vinegar, honey, or both as a pungent tonic. Perhaps I will explore these other preparations after my next foraging trip, but for this batch, I went a different direction.

I decided to look at the warming and grounding properties of pine in my preparations this month. I used Berger’s infused oil recipe to create a pine-infused olive oil that I can use as a warming massage oil during the dark, cold months. The aroma will be soothing to my spirit while the oil itself will bring blood into the areas of my body that might grow stiff with cold and inactivity. I chose not to include the additional evergreens in her recipe, partly because I did not mange to forage all of them, but also because I found the scent of my pine needles just so intoxicating and wanted an oil of just that beauty.

I also decided to infuse some of my magnesium bath salts with pine needles by alternating layers of salts and cut-up needles in a jar and letting it sit for a few weeks. This will make a beautiful ritual bath for midwinter. Bathing is one of my favorite ways of grounding and releasing tension and negativity, and like many others, I find myself somewhat overwhelmed with the darkness of the time of year.

At the same time, the period between Samhain and midwinter are personally more difficult because it is a convergence of anniversaries of grief-filled events in my life, so I often find myself in need of a warm cocoon to which to retreat and replenish my energy. Perhaps I will find that peach in the boughs of my pine medicines. 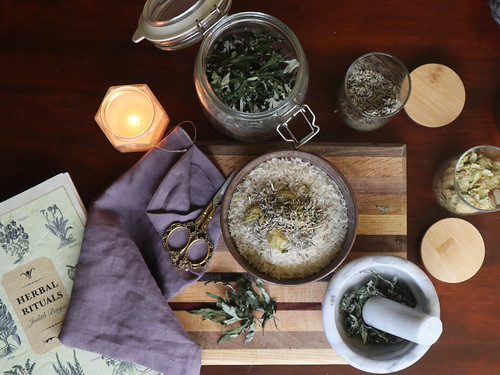