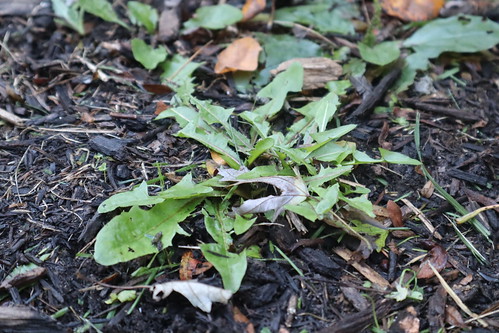 This is something that has been floating around in my head for a while, partially inspired by some of the videos that Regina at In Her It Blooms has posted, and in part from a class on pre-Colombian indigenous foodways in what is now Mexico. And it’s something that isn’t brought up a lot in the discussions of ancestral herbalism and appropriation, at least as far as I’ve heard. And that is the privilege afforded to American descendants of Europeans to practice their ancestral herbalism on soil that did not originally yield the plants native to Europe.

You see, when Europeans came to colonize these lands, they did not just colonize with people. They also brought animals and plants with them. Rather than just learn to adapt to the native flora and fauna of this land, they brought over the things that were familiar to them. It’s why we farm cattle and chicken and pigs instead of turkey and bison. And it’s why every lawn, at least in my area, is plagued with dandelions. Because many of the medicinal plants from Europe are invasive weeds in America.

It came up when I was chatting with the presenter who was teaching us about Aztec foodways, she mentioned something called garlic vine, which is apparently common in Latin cuisines, but difficult to find outside of Latin markets and I asked if it was similar to garlic mustard, a wild plant that I can find near me in the mid-Atlantic. She hadn’t heard of it, but another class participant pointed out that garlic mustard is not native to the Americas and is considered invasive.

And that reminded me of the lovely patch of mugwort that grows next to my house and yields so much plant matter that I’ve used for various botanical experiments. Well, mugwort is also considered invasive to the Americas. It was likely brought over by Europeans to populate their kitchen gardens and escaped, as many weedy herbs are wont to do (like the spearmint that does glorious battle with the mugwort). And looking at my yard, I can identify many of the plants there. And so many of them are native Eurasian plants that have been “naturalized” to the Americas. But that is just a nice-sounding word for brought over and took over, or colonized.

So, as a colonizer, I can now “wildcraft” plants that are found in my own ancestral traditions by walking out my front door, despite the fact that they’re not native to my home soil. And yet, these plants must be displacing something, which are the native plants of this place, just like colonizers displaced indigenous peoples.

We should also remember those of us on this soil who are not descended of colonizers, but are instead descended of those kidnapped and brought over by force. And while there are some plants that were brought over from other looted lands, they are not nearly as prevalent in the wild landscape of the US. So while I can walk out my door barefoot with a pair of scissors and gather half a dozen different European-tradition herbs that I didn’t even have to plant or tend myself, another American might be forced to find a source of the cultivated herb, paying money to reclaim their own heritage, which my ancestors brought over for me to have for free.

All of which is to say that, while I am thankful for my ancestral traditions, I always try to remember that it is easier for me to practice it than others, still rooted in the ways my ancestors stole this land that I now consider my home. So as I go through my own journey, I am careful to give credit to the traditions from which I learn, respect the traditions of others, and make sure to do all that I can to keep less-privileged traditions accessible to those whose ancestry they are.