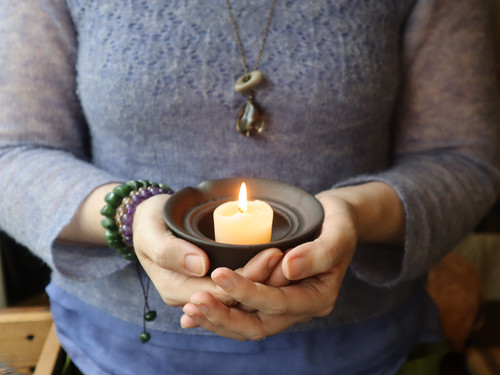 It is no accident that I chose to launch this space on Samhain. In the pagan world, Samhain represents the end of the old and the beginning of the new. It is the beginning of the cycle of a year that represents death, and the time from Samhain until the Winter Solstice is a liminal time, a time of change and preparation for rebirth.

It is also the time of the Cailleach.

I will pen a proper introduction to the Cailleach later this month, as the first in a series of dives into deity figures, but at Samhain, the Cailleach takes over the influence of the season and brings us into the dark half of the year. Despite the fact that the days have been shortening since the Autumnal Equinox, or Mabon, around the end of October is when I really start to notice the shift. And it is the end of the harvest season, which is why daylight savings time ends around this time, plunging us into every-earlier evening darkness.

And in this time of darkness, we not only look to bring the light to soothe our minds, but we reconnect with the aspects of death. The traditional Jack o’the Lantern was a wandering soul, with an ember in a carved out turnip to light his way, a flickering eerie light, if my experiments with carving turnips are any proof. It is the time when the boundary between this world and the Otherworld is the thinnest, and a time for divination, ancestor work, and shadow work. A time to sit and contemplate.

One way that I’ve chosen to mark this holiday is by doing a lot of work to connect with that Otherworld and my ancestors. I’ve taken some courses, about which I will write later this month, that have helped me reconnect both with my personal genealogy journey, as well as my own intuitive understanding of how my ancestry informs my practice. And the Cailleach is the divine representation of that deep, crone ancestor who came with the land. So as I sit in the times of darkness, before sunrise or after sunset, I am sitting with the departed and the deep ancestors.

But it also a celebration. As I said, it is the final harvest festival. We often think of the end of autumn and into winter as the lean and sparse times, the hungry times of the year, but there was an interesting section on a podcast I listen to on the history of Britannia, where the creator talks about harvest practices in the ancient world. Our ancestors were not foolish, and they knew they did not have our robust food supply chain. They knew they had to preserve their food. So the late autumn and winter were the times of plenty. Right after the harvest was brought in, it was prepared for storage and the stores would be full. A wise society with a robust production would have plenty of food to last through the winter and into the spring until the new plantings yielded plenty again.

So while Samhain may have marked the time when our ancestors might have found themselves without the fieldwork that occupied them during much of the rest of the year, they were not starving. In fact, it’s possible that this was the time that they had to create dishes from their stored food. Think about the traditions of baking around Yule and you’ll see that it doesn’t make sense for this to be the entry into the lean times. So Samhain, for me, is an entry into a time of homey cooking, baking, and other around-the-house crafts that keep us cozy as the weather brings in a chill. The world outside might begin to look dead and skeletal, but it is merely resting, in hibernation, conserving its energy to burst forth in the spring.